We had a 2 day jam in Dundee Scotland at the weekend called story world , which encouraged games with a bigger story driven universe. http://scottishgames.net/tag/storyworld-jam/
I went solo and this was the game I made.
Made in blender game engine and then I also got the basics minus the special effects/ shaders working in unity in the jam too.

The theme was "cure", and instead of going with the obvious interpretation of actuality curing/ healing something or as some other people did , cured ham/meat, I tried to flip it on its head , and make the curing processes a bad thing, comparable to death.
The story is that there's a planet full of lizard people possibly called clay lizards, when they reach a certain age they must cross the desert to prove their worth and become men.
And that's where the game comes in; you have to make it across a small area of desert without drying out and "curing" in the sun. The ones that make it get given hoods to make it around more easily in the future. There was a lot of other elements to the story like having incurable lizard rivalries and stuff but doesn’t effect the game.
The next mechanic however is that you can use your fallen companions as shade ounce they have cured, cruel but sometimes essential.
Here’s some screenshots

submissions for the blender game making challenge 11 are open , for a day. Anyone wanting to enter , post a link over on blender artist with a link to your work in progress thread and  a link to your game. 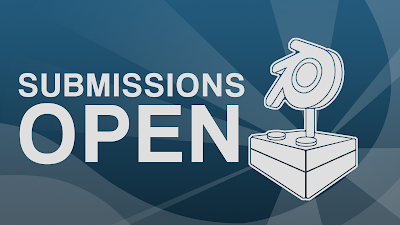 Thanks to everyone who participated
Posted by wallmasterr at 16:54 No comments:


Hi everyone its time! Here is the Theme Announcement Video:

And for the people who don't want to watch the video here is the text instructions.
Its time for the Blender game making challenge 11

Read more »
Posted by wallmasterr at 18:26 No comments:

Hi everyone , its almost time for the next blender game making challenge.
Here a video with more info: (offical video http://www.youtube.com/watch?v=_IvZ37ECzHM)


Sorry about the quality , it got compressed really bad, the next video will be better quality. :D

Yip the prizes will be :
The new Art of blender book (http://www.blender3d.org/e-shop/product_info_n.php?products_id=164)
A gold painted blender game making trophy

Since the pre-giveaway didn't work anyone who enters a game get a game from the humble inde bundle 9, while stocks last (i bought 3 bundles to give out 3 steam keys of each game, so there should be enough to go around)

Hope to see you all on the 20th for when the theme will be revealed.

Posted by wallmasterr at 17:54 No comments:

Its time for a giveaway!
As I mentioned in the last post I'm orgonizing the next Blender Game Making Challenge and as pre event promotion there's going to be a few giveaways.
The first of which is a steam key for Trine 2 to the best 3 new blender tutorials.

check out the official Facebook page here for more info on the contest:
https://www.facebook.com/bgmchallenge Im also working on getting some other prizes for the overall winner/ winners, so stay tuned for that.
Hope to see some new tutorials soon, I'm planning a couple soon too.

Posted by wallmasterr at 16:35 No comments:

So its been a little bit.
Just been working away at Ninja Kiwi :D
But a couple of weeks ago was the 10th blender game making challenge (BGMC)
http://www.bgmc.tk/2013/08/blender-game-making-challenge-10-theme.html

I took part along with a hand full of others.
Its a week long game jam , where we have to make a game based on the theme of Movies or tv shows.
Heres my blender artist thread on developemnt
http://blenderartists.org/forum/showthread.php?304779-BGMC-10-Insectors

download it here or on the forum:
https://docs.google.com/file/d/0B1uee0Nf50b8enB0dk9DVlNNZ28/edit?usp=sharing
the blender file is up on the form too so you can see how some of the stuff was put together.

The TV show i went with was Insektors, one of the first 3d cartoons i can remember.
I wasn't shure what the game play should be like but then i watched a couple episodes on YouTube. And thought that a rail shooter like panzer dragoon , kid Icarus or Sin and Punishment would work well.
I also wanted to use this project to get my head round the Blender game engine upgrades in 2.6x, so long 2.49b , il miss you.
I did learn how a lot of stuff works now and realsie that the new version is much more presise, as in the old one let you get away with a lot more.

for example : meshes don't deform via armature if the mirror modifier is above the armature , so you need to apply it but its pretty nondestructive as it automatically updates weights if you re mirror and reapply.

still having trouble with aiming / collisions but nothign a little experementing cant fix.

Here is some screenshots of the game in action: 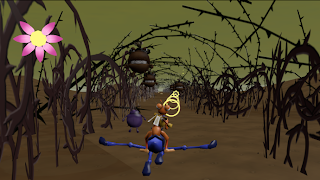 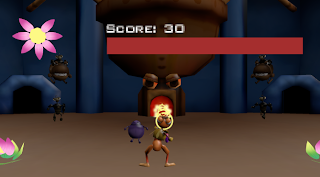 Il record a video soon and post it too

Anyway , I won :D!!
The prize , a copy of Mirrors Edge and the theme choice for the next challenge

And on the topic of the next challenge, Iv been chatting to the guy who runs it and he was looking for someone else to run the next one because he is busy at the moment.
Sooo ,
i said I would give it a try.
I want to try to get a bigger following for the contest and grow the community a little :D
For instance the Facebook and twitter pages for the challenge only have a handful of followers which is limiting the  online presence of the contest.

Heres the links to their facebook and twitters give them some love and the the buzz started :D

Final note, I'm going to migrate this blog over to LowtekArt.blogspot.co.uk so the next few post will be both here and there. If you want to keep following my updates make sure to follow this new blog
http://lowtekart.blogspot.co.uk/

Posted by wallmasterr at 14:28 No comments:

Just a quick update to say the Art collector game for featured on bGame, a blender game repository
http://bgame.anicator.com/ 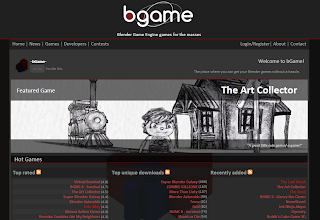 Actual game page
http://bgame.anicator.com/games/140/the-art-collector/
I should think about publishing for OSX and linux, but dont know how the level loading works on platforms apart from windows. But want all the Linux user to be able to play too. will boot up my Ubuntu live CD some time soon.
Posted by wallmasterr at 14:42 2 comments: