I'v wanted to do something with crossitch art style in game game for many years. I finally got round to making a media test of what the animation style may look like.
I did a bit of crosstitch growing up as my mum is a seamstress.


I scanned in some physical crosstitch of lots of different stitches and color  and cleaned it up, not the actual scan.

I did try to animate this inphotoshop at first but it took ages and i quickly realised that i couldnt animate out the stitches the same way as they animated in as it cause weird effecs and as i said took ages. so I decided to make it easyer to mess around with the effect in unity.

Then in unity i animated the stitches animating in and out. in photoshop and imported into unity.
I added a colider to the stitch adn animation controller to animate in and out.
Then a ball with a trigger that active each cross when it collides.
I animated the ball. 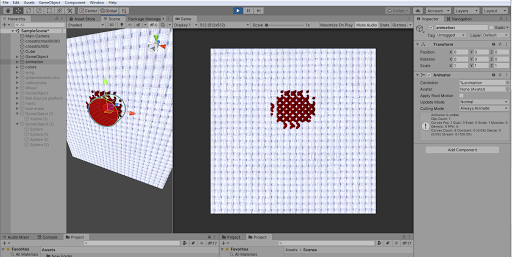 This is the first test.

I then wanted to add more colors so desatureted the stitches and colord them using the sprite color in unity thoguh c#, this makes it darker as its using multiply blend mode but il fix that later on. Just wanted to set up colors.
Here is a test of multiple objects being used to animate a bird 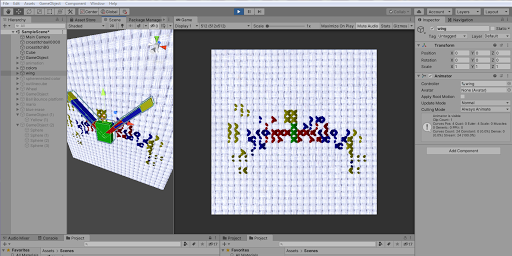 I set parts of the bird to be colord

heres a rotating wheel test. The code needs fixed so it dostn overight a triggerd x when its already been triggerd, thats why the middle gets a bit glitchy.

I then tried crosstitch consecrations of a ball with other balls inside it. i thin this looks prity cool and iv always had a fascination with consecrations.

I then tried something that looks a bit more like a game in motion but realised that the block moving left seems a bit glitchy.

I made a small test of a single stitch moving accross the screen and noticed that left to right looks great and fluid but right to left seems off. I think il have to make a stitch animation for every direction adn make the stitches aware of their direction in the future to sort this. In the future with a more robust system it may need to keep track of adjasent stitches over time to tell weather its moving one way or another.

Im gona turn this into an animation tool to create crosstitch animated gifs in the future and il keep you posted on the updates.