Ok for this test I wanted to recreate the style if Hellboy. The comic by Mike Mignola. His iconic style uses very stylistic shapes and minimal backgrounds with harsh shadows.
The reasons for doing this test is because a found a paper trying to duplicate the look of Hellboy but didn't quite get it right and there was no pictures of it applied to a model of Hellboy.
There is also a segment of Unfinished swan which looks very much like Mikes style and iv been wanting to replicate this since I played it.
Spoiler don't click if you don't want to see a bit further on in unfinished swan:
https://dl.dropbox.com/u/1993209/unfinished%20swan%20screenshots%20hellboy.png

This is the last outcome image, i put it here to make it show up as the post image on blogger. 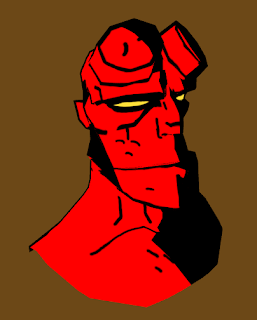 I looked online to see if anyone else had made Hellboy 3d look 2d in game before but didn't see anything at first glance. Got a couple of reference pics and started modelling. I am going to focus on the bust right now and if the effect works well I may go on the make a full body and simple environment.

Image from the comic :

Image from the comic : anyway I know that I'm going to use a ramp shared with the type set to constant for the divide in shades so I started making the model.

This was my first attempt, its a bit crappy but i thought it would do. 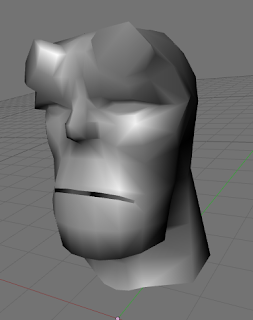 then I was looking for more reference when I noticed that one of the images at the top of the google search was in fact 3d.

On closer investigation it turned out that it was also in fact animated  and look s relay true to the original. Made in 3ds max and Brazil. All the detail is done with mesh so the outline filter makes the lines consistent.

After seeing this i realised that my mesh had to be better , on his website he has a semi break down of how he did it, just a few rough stages with anitation.
Here is what the mesh looked like in max.

I was surprised to see the cleanness and level of detail in the mesh  and had gone completely different way in modeling , so started again from scratch and took notes from this model.
Big cheek bones and straight features are what make this work realy well.
He also posted a side and 3/4 view of hellboys head what i took into photoshop and made a front and side from:

from this reference i drew this rough ortho sketch.

Brought that into blender and modled again. 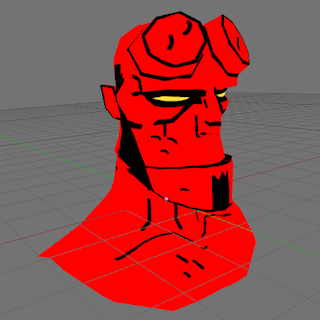 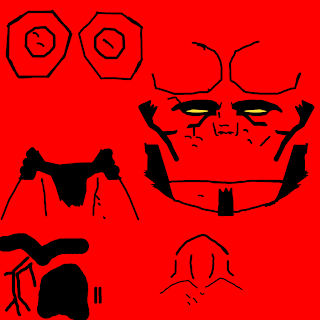 just noticed the horn flipping!
Added an outline by duplicating  the mesh , scaling it along the normals a little and inverting the normals. 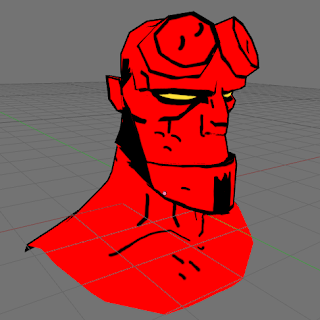 Added a simple shadow node set up like the ones iv been sing in previous examples. 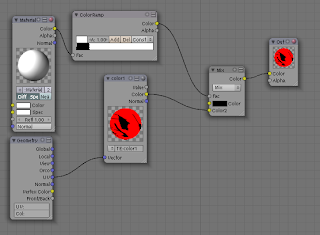 this worked ok but the eyes were turning black when in shadow where as they should remain constant colour. 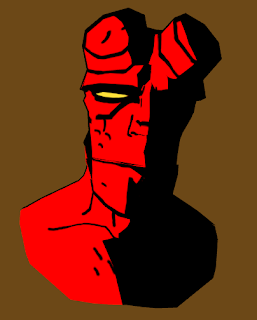 So I made a new texture with just the eyes and black. this may bee a little over the top for eyes but it has future capabilities.
Black and yellow eye shadow texture: 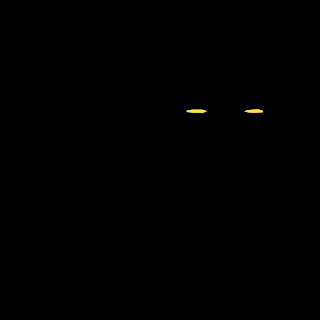 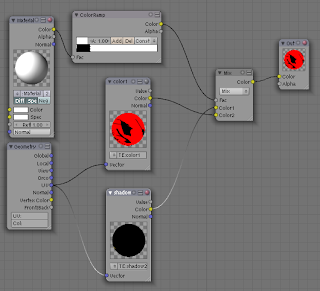 This is the new eye shadow texture applied

I mentioned the future a little ago and this is why, in one of the original images I noticed that the line detail on Hellboys arm gets inverted when it is in shadow seen here its very slight but it is something of note.

So this image was made as a test to see how it looked inverting the line details on his face. 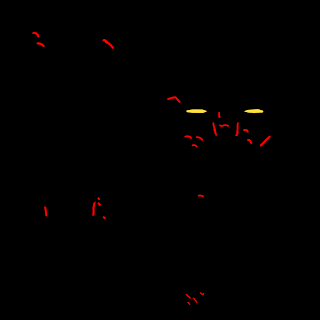 the effects works good but seems out of place on the details I tried. 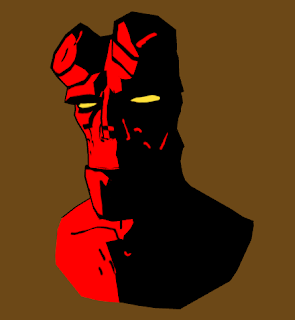 Here is the video of it running in the blender game engine:

In conclusion this test worked. I think the shadow technique was good when used in conjunction with the extra texture to unveil hidden details or keep elements like eyes glowing. Also its worth getting good orthographic reference images from the beginning for some more complex things.
I will at some point probably go back to this and make a body and simple environment witch some kind of game play. Mabie like in the animation test above a tower defence shooting gallery type game would suit this.
Labels: abertay alastair low blender comic Concept Development dundee hellboy lowtek media tests nodes non photorealistic npr Pre-Production shaders