I was working on a simple environment for Train Face Boy a few weeks ago but haven't posted it yet but I came across a big problem. The controls! If anything can lose immersion in a game its aquard controls I had a simple tank movement control style like in the Resident evil games. That wasn't so much  of the problem but the way the camera was set up did. it was mapped to the q and e keys to rotate. But when you rote the camera the character continues on the same path regardless of camera direction. I want the ability to freely move the mouse around the character when he is static and then as soon a a direction is pressed it points that way in relation to the camera.

In the past iv found a few good 3rd person camera scripts but the best ones are only for blender 2.5 and above, I still want to stay in blender 2.49b for right now I can append files and update at a later time if I have to.

Here is that video:
I expanded upon the set up in this video. This was very similar to a setup I tried a few years ago but didn't have the vertex parenting.

I have tryed several times in the past to get a control scheme like this but always ended up over complicating things or the diagonal buttons being really twitchy.
(For background i used to use a key framed 8 directional movement system) 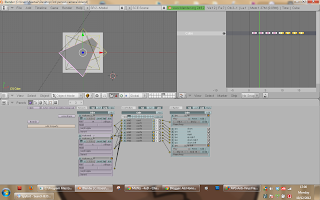 I looked up to see what other people had tried and one video made me remember a thing called a vertex parent. A vertex parent allows an object to be parented to another object but only by location. this means that the camera could move freely around the character without changing the him rotating too. 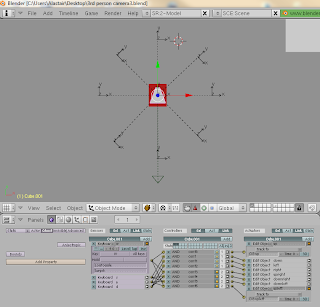 I realised now that i could use one empty with the rotate ion animation on it, just to save on object in the scene. This will be implemented in the future.

Here is a video of the movement scheme in action, sorry about the bad frame rate  screen cap was going slow today:

This will is a verry similar setup to what i will be wusing on the final project.