The Snowman and the Snow Dog Quick Studdy

SO this post is gogin to look at both "The Snowman then the snow dog" and the accompanying game and look at the way that the style transitioned
This post is a flllow up the provious post on the origonal snowman found here:
http://alshonours.blogspot.co.uk/2012/09/the-snow-man-quick-studdy.html

heres an animator drawing the snow dog, sad that channel 4 only releced these short drawing clips with the film. Would have liked to see a break down of some shots and techniques.
http://www.youtube.com/watch?v=-RU1kLWDJh4

There is however a few text articles on this.
http://www.telegraph.co.uk/culture/tvandradio/9742077/The-Snowman-and-the-Snowdog-the-making-of.html

The film is animated at 12 frames a second and is 24 minits long.

"it has probably used 200,000 pieces of paper and gone through some 3,000 pencils"
the origonal snowman was colord on cell/assitate with wax crayons, but for this they just used pencils and paper changine the overall look of the film slightly form the origonal.

'We had the debate about all the programmes you can use to make something seem handmade,' Harrison adds, 'but I think if you plan to go to all the effort of getting something to look like you have picked up a pencil, why not just pick up a pencil?'

And here is the animation:

for the most part the film is hand drawn, and then composited together with computers. There are a few computer generated effects sutch as the snow but his was to save a lot of time and each flake is 1 of 5 hand drawn flakes.
like the origonal things only have the unseteling sketchy look when they are mooving. This new version  uses a lot more pans and rostrum shots than previous. And even rotates objects like the chrsismass tree in the house whitch i felt stood out and could have been better animated. 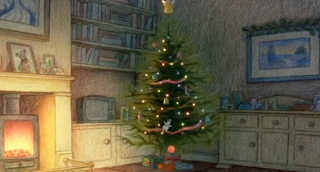 The flying through the air section is similar to the origonal film in that the framerate seems to drop and the level of detail on everything gets decreades. it is verry sketchy and plays with weird perspective a lot. 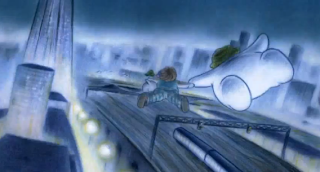 Some of the backgrounds use thicker lines and blur the details to create a contrast to the sharp lines of the characters in the four ground. 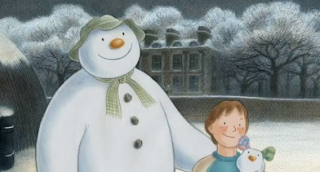 For some reason there is a part where they land and hijack a plane, possibly to resemble the motor bike portion from the origonal film. (the bike from the first film is in the shed as a little look at the past)
Anyway this plane is i think 3d, its the only element whitch seems to be 3d, if not rotoscoped as it look too smoth and the texture seems a little artifical as shown in the image below.. 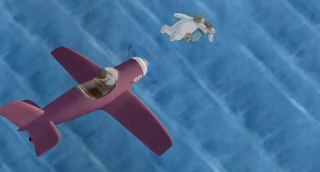 And here is some video gameplay of the phone app/ game in action:

The game is basicaly a rail shooter mutch like house of the dead in that the player dose not move the character driectly, but simply taps objects such as snowflakes and snowmen while the characters fly by them in the sky. Its a child friendly rail shooter

I could not find much info on the creation of this game but i have played it through and enjoyed the experience.

Notable elements whitch do and dont carry over from the animation:

To start of the game has a frayed water color paper edge around the screen which is nice but at first when there was no images i thought that something had happened to my screen. Also note that this edge effect is not present in the cartoon but it dose emphasise the style in the game

The game attempts to recreate the flying to the north pole journey collectiong stuff along the way.
The weird confusing perspective is not present here like in the cartoon but that in its self could be confusing for a game and not to mention realy hard, so it makes sence that it has been left out. One thing whitch is attempted to be emulated is the flickering effect of the sketchy pencils on the enviroment, this is done with an animated texture overlay in the uv space (i think its uv , apose to view) At first i didint knotice this  but when i ded i was happy to see it was attemped and its subtle enough that it dosent get in the way. There are some ugly hills at some point of the game but these are few and far between and i dont know why they are highlighted over the others. They have a large almost normal mapped texture on them which feels out of place.

One thing left out whitch dose anoy me is the lack of an outline on the characters. Im sure they could have used a method similar to the mesh scaling whitch i use in my examples to add that little more to make it look like the cartoon. Also the characters texture is not animated. This is confusing as they tryed to emulate the flickering on the enviroment but forgot about it on the actual characters, eather that or they have and its soo minute that i didnt even notice it. Again this wouldn't be har , just double the size of the texture sheet for the characters to have 2 frames to flicker to.

Applied Framework: (wip)
This is the first time showing off this frame work and i know that it needs more work in the future

Artwork deconstruction (The Snowman and the Snow Dog)[Animation]


Grading system how well something was achived : very good , ok , not at all
Reconstruction in 3d implementation (The Snowman and the Snow Dog)[App]