I met briefly with Ken on Friday. He talked through feedback for the latest draft of my project proposal.
There were some grammar errors and spelling mistakes, and he set to be cartful when quoting the opinions of fouls to make sure you acknowledge that they are fouls.
Also in my proposal I had wrote that I'm going to do a questionare and this has surprised most of the lecturers I have ran this by. Its not a definite thing , just think it would be good to test weather the final piece portrays the mood/ emotions which I intended. The questionare would be presented to anyone after they had played through the experience. And have a small range of qualitative and qualitative questions.
Iv just been polishing my proposal, adding pictures and backing up and explaining some points and its almost there. I am fining it hard to believe that I am at the top end of the word limit with my proposal currently at 3394 words. A couple more days and it'l be ready to be double checked. Hopefully... then it needs properly referenced. :(
O ye and need to have a look at the ethics form this week, its on the to do list.
Then back to the good stuff :D (Media Tests, story development .etc)
Iv also to look for another name for "Arty games" which i have used several times in my proposal.
I will leave you with this image I made in blender playing with all the latest features. Cant wait for the next build as its rhoumord to have a feature comparable to sculptris, ie creating extra geomitery as and when the brush needs it. 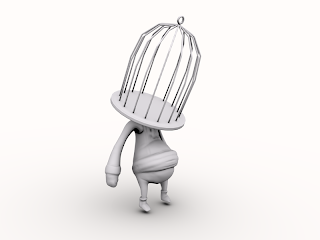 Really not the best sculpt but this post needed a picture

Anyway i made this in like 40 mins and I tried to make a time laps of this proses demonstrating some of the new features in action but it broke while it was saving the movie file and it got corrupted. I used a new modifier called skin which when used with mirror and subsurf is basically the same as using zsheres in zbrush. its really not the best sculpt but it let me play with the newish sculpting tools in preparation for the really new ones in blender.
Mabie new sculpting time laps in the future.
Labels: 3d abertay alastair low blender dundee non photorealistic npr Pre-Production