Sorry iv not posted here in a little while. Kinda hit a creative wall for a bit but think im back on track again now , and i mgiht drop the oil paint level no, il do the pop art one and see how much time i have, but the prison/oil paint level is big and could take ages.

This level has been ambiguous for a while now but its the final stage and i felt that it needed to be epic. So at first I was going  to make a castle but that was realy similar to the prison level which comes directly before. (Prison level may be droped)
So I Looked at my villan character and decided since he is a skeleton that i should make his setting a graveyard which also fits the sketchy style, reminiscent or Tim Burtons concept sketches.

I started out sketching a general look of of the level I wanted: 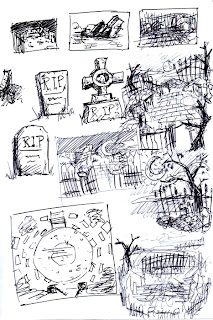 In the lower left is a basic sketch of the level.
I knew that i wanted a simple arena which the 2 characters could just fight.
I started off with a basic area with a bounding invisible wall
And some grvestones.

Grave models with textures, I drew some shading detail into the texture and emphasised the edges with black:

I then duplicated and moved around some gravestones around the outside of the arena and added a very basic tree with a black material, the graves also have th sketchy shader shadow mask applied to them like in older posts: 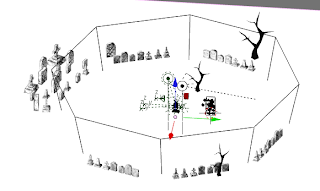 Then i started to ad some verticality to the scene in the form of hills again much the work of Tim Buron, also added a fence as its something which all graveyards should have. 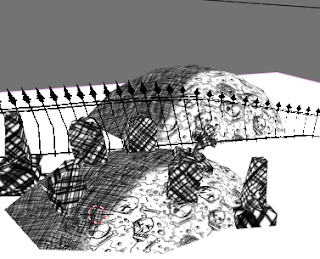 Heres the skull texture for the hills: 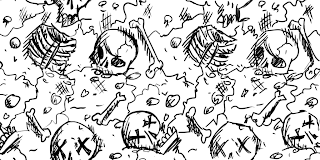 I dont realy like this texture , i thought it tried to emply to much 3d shape in the skuls and bones, but just looked flat, and the realy noticeable tiling wasn't nice aether.

At this point i still dint like the way things were looking but kepet with it and just adding stuff to it.
I duplicated this 1 hill and modified it in size and shape to go around the perimiter. 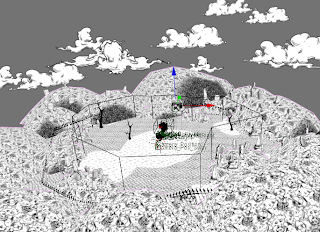 Also drew some clouds with 2 frames to flicker between.
Clouds inspied from the ones in the edge chronicles books 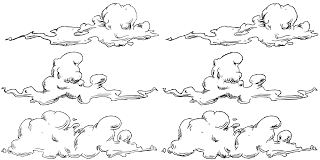 there are 2 objects containing some clouds and each rotates at a different speed to get a feeling of depth.

I had had enough of that skull texture so made a tock texture andin like the clouds inspired by the edge chrnoicles style. 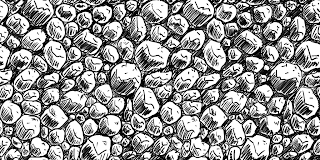 I also brought in the  brick texture from the twig media test: 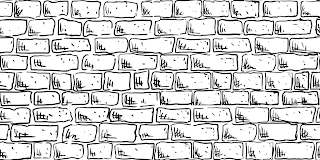 And the simple stone textre from twig too 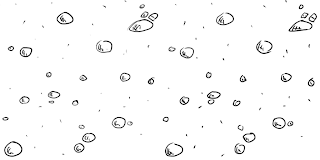 I also started setting up the ground plane for texture splatting. Much like in the You are the dragon test. 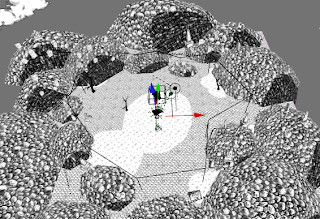 Also updated the shadow mask texture to one from the Did this as it was a good tilabe texture and the other sketchy ones i made were hard to tile. Plus this wraps evenly over surfaces because tis on 90 degree angles 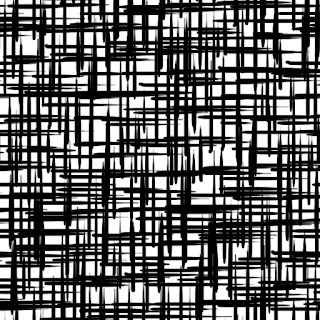 I continued to refine and add multiple layers of texture splatting. Adding some detail and variation in the hills. the scene almost looks like a snow scene now but i felt the textures need lot of white otherwise the scene woudl get far to buisy. Used a layer of splatting to drawn in shadows cast by gravestones 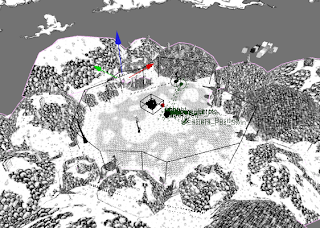 I made the sky black to test what it looks like aganst the mainly white ground.
But didint like the overall feel as in sketchy pen images any areas of black are usualy dense sketches not solid color. It also somehow reminded me or Dr Seuse 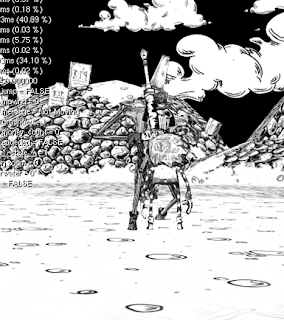 I tried making a sketchy texture work in screen space but the size was far to big , I don't have this screenshot sadly but it looked horrible and detracting  But I started to look at what other nodes were available and came across the mapping node(never used before) 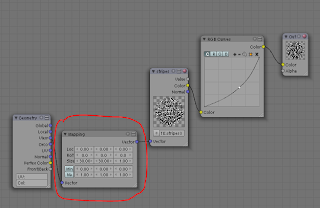 This node alows you to change the amount of times a texture tiles. I used to just make another object with the texture on a materail with the right tiling there and then refrenced it in the nodes. But this lets be do it all here, also you cannot use the view node attached to a material but u can to a texture. so now i can tile that nice tilable sketchy texture for the sky in view space. 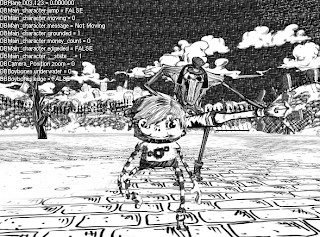 I then fixed the flore nodes to show dynamic shadows, heres the nodes:(its almost to big for my screen and the node editor wont zoom out any more) 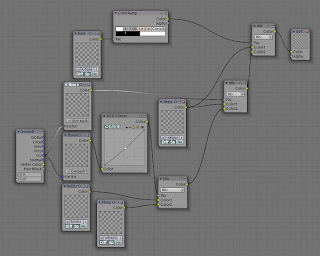 Also changed the outline on the boy and the shading to the same as in the monkey shader cross-hatch test.
The Villan get a white outline to help define him from the background  and also works to flatten him out, giving the piece a children's book feel somehow. the trees on the hill got the same treetment

Heres the level in Action:

This is where im at wit this at the moment, and will do for a first pass.
There are a lot of things i want to fix when it comes to the 2nd pass.
And i would also like to get a more complex Ai stytem in place for the villan as hes relay hard to get away from at the moment because hes constantly moving towards you.
The trees need updated and i might add a better moo and stars

There needs to be some more props in the actual game play areana but i dont quite know what yet that wont get in the way much.
Labels: 2d 3d abertay alastair low art bge blender game Honours Project Portfolio lowtek non photorealistic npr pen personal development photorealistic realtime shaders sketch style