Im trying something different for this post , im writing the post as im making stuff in blender and then posting progress. This will make the post a lot longer but a lot more indepth and can track any mistakes or changes i make. (let me know if anyone likes thi sapproch better or not, i think i would like to see the final things and how i got ther rather than the whole prosess.)

Ok so the first thing i made was the art gallery / collectors house, this is the hub world which u use to go between pictures.
The scene was updated slightly since the post with the 360 controller. 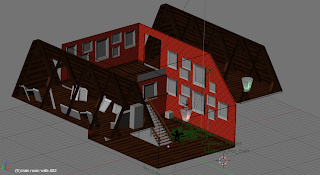 since then I also scaled the level by 1.5.(Note i centred the orojin and changed to 3d cursor type, then scaled everything in edit mode, as you get problems if u scale things in object mode sometimes, especaly with collisions)
By scaling thi  the camera dose not clip as much through walls as it did before and it seems like a good size now.

Ken brought up in a meeting ounce, how dose the player know where they have to go. I answered with aether speech bubbles or audio cues or footprints from one painting to the next .
SO here I have made a simple footprint texture and made separate objects for the different stages which can be hid or deleted depending on where the player has to go next: 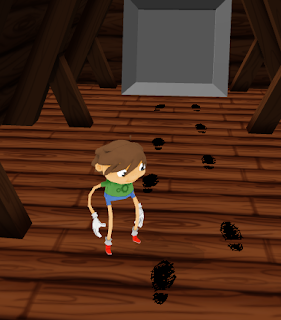 I made a door which can be reused through the house and re-textured for the pop art level: 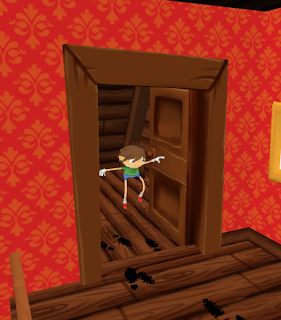 this door is a little big due to scaling up the level at the start but i would rather it be to big than too small and make the camera twitchy. Texture will be updated as-well.

I made some simple picture frames and mapped them to a basic texture sheet: 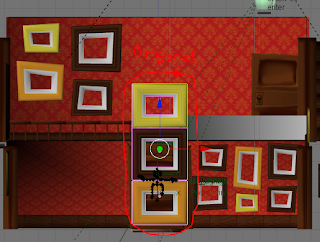 After having the basic rectangle shapes i made stuff squint to ad a more cartoonie feel and make it more visualy interesting and unique. Il put a serise of planes behind them with all the images needed.

Then i made a lamp for wall decoration:

uvs arent the best but they will do for such a small pice of scenery.
Heres it with textures: 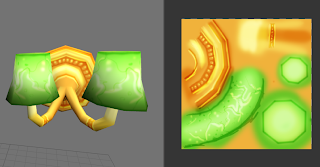 from there i ambient occlusion baked the walls and added the wallpaper layer using multiply blending mode.

I also made an Ao map for the wood areas like the floresa dn the attick walls:

TBC...
UPDATE
I added some spider webs in the attic.

The web texture has an alpha channel and the opacity of the white lines is set to about 60%, the alpha type is set to basic alpha , not cut out.

I then made an image 4x4 with loads of images to fill the frames with I drew a mix of famous artwork and half way through decided to add some of my work but i feel the versions of existing artworks are the most effective and have a nice charm to them: 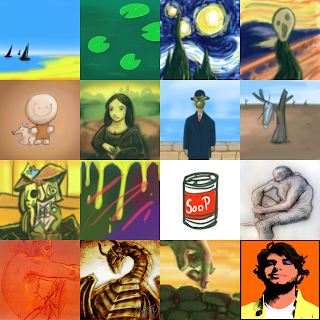 I carfully placed these images in the frames in 3d using snap to vertex on the frames.

Then i made the images for the actual paintings youl be exploring.
I put them in 1 texture to cut down on materials needed. 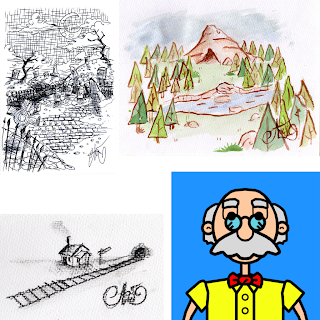 The pop art one kind of looks like a Julian Opie painting.
Then i needed a way to tell the player how to enter paintings and this is done with a plane whitch moves in from the side of the screen when the player can enter the painting. 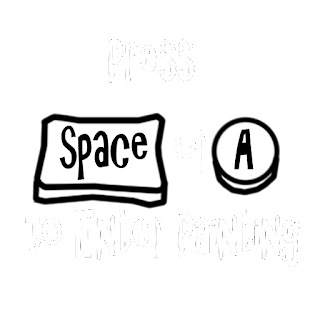 Here is the scene in action:

Just need to link in the other levels and get them to work now.(more problematic than I thought)