What have I been up to this week?

Well, after the crit, i had a bisness meeting on Saturday  went well but after that I wanted to have the weekend off and it was st patricks night and that drank the day away over some games at a mates.   Then started the dissertation on Monday  Not concerned with a structure while writing this time I just rote down all the key methods used to create the shaders and effects iv been working on . I got around 1000 words out of that and hopefully most of it will make it into the final. I talked about how they work with images and gave examples of where they have been used be fore, advantages and disadvantages of each. SO i need to do a deconstruction session of artwork to tell how each of these techniques link to the physical media.
Then I fixed a couple of things which were mentioned in the crit.
Like the pop art character shaders being too dark , I also felt this and was putting it off but ounce someone else pointed it out it needed to get fixed.
Heres the new look shaders.

It just darkens the dots in the shade and still has a white highlight: 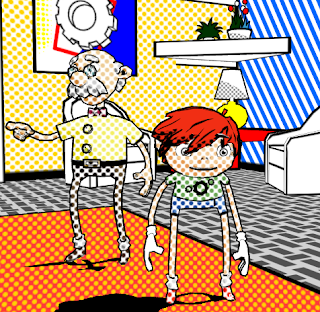 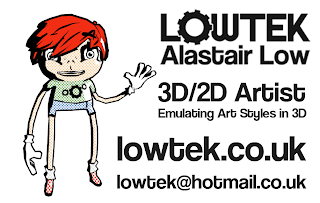 Also was playing epic mickey 2 to get used to the brush nunchuck and as I mentioned at the crit it is realy uncomfortable so may no be used, but.. while playing epic micky 2 the cut scenes intreeged me so i did a little media test to see if i could replicate the 2d visuals in 3d, I think i came pritty close.

Heres a video of the test I did:(Sorruy about the bad gradients, camstudio)

Its just basic because i didint have to much time to spend on it. But hope to work more on a shader like this after the project is done. I had the idea of a cloud map being able to be used for the painterly shading/ highlights could be effected by a shadow gradient to create the falloff needed to prevent a hard edge.
Labels: 3d abertay about me alastair alastair low Honours Project Portfolio lowtek personal development shaders update