I ran a Google search to see if anyone had made a game that looked like a pop art image and couldn't find anything. I then thought how fitting it is that some don't consider aether pop art or games to be art and that a combination of the two would get 2 groups of people in a kerfuffle.
I initaly wanted to make a game where you played as a character in the style of Roy Lichtenstein and have them do something in the kitchen realted to Campbles soup cans by Andy Warhole 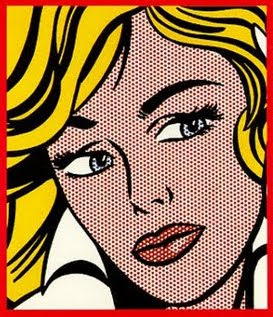 But then i saw this picture by Roy and thought that could make a good quick easy to make game!

And shortly after finding that image i found this 3d version of it but thought it was lacking  in form.

Then i started making a plane madel in blender. I chose blender as I found the examble whitch allowed the dotty effect in game engine. The first plane was a failure and I didnt even screen shot it. So i looked up the plane in the picture. Aparently its based on a North American p-51 Mustang: Imade a styalised orthografic refrence to help modeling whitch i acsidentaly saved over and only noticed whilst making this blog post :( 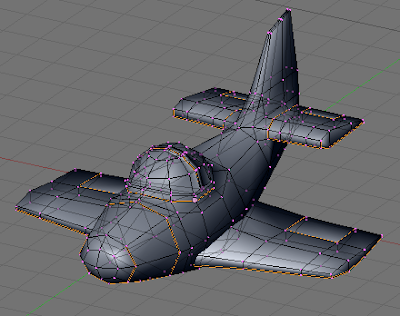 Then I drew all the elements needed for the explosion and assembled them in 3d using planes. Then rigged and animated it to expand like an explosion and the text to wobble. 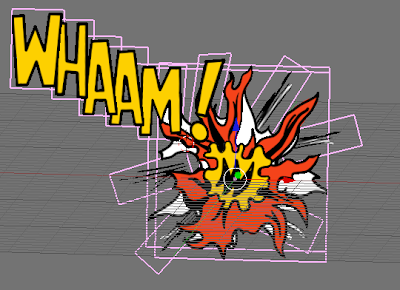 Then I made bonuses and health pick ups in the form of a Campbles soup can a attached to a Mcdonalds balloon. The Macdonlads baloon is to make the consumarism point whiutch Andy Warhole always tryed to make and it fited in with the health pickup as food in games usualy means health.

Shooting the soup can gives a 200 point bonus and the ballon restores one health.

The enemies in the game just track to the player and shoot every 300 ticks .

The final thing to do was add the actual shader material effect.
(I did initaly have bigger dots but thought it looked a bit weird) 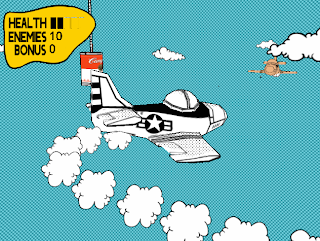 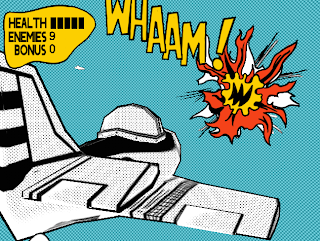 I think this test was verry sucsesfull. In all i woudl say around 9 hours of work. The material shader workds as expected and reacts to light , creatingdotted shading effect. and the blue background isnt as anoying as i thought it would be.

And heres a video of the game in action:

If you want to try the game get it here : My dropbox
(Its a .rar finle ul have to unzip it, using winrar or something)
then double click the WHAAM!.exe and the game should start,(it onpens a text dos window aswell so dont be scared) there is a slight load time at the start and between the scenes but give it time and it'l come.

Get a high score and post a screen shot of it on the blog if your proud of it. :P

Any feed back is much apreciated.
EDIT:
This test was successful in capturing the essence of the original image but when placed next to the original it is a much cleaner version but everyone I have shown this to say yes that's what they expect of pop are. There is some colour variation in the dots, almost a water coloury feel which is not present.  Pop art was still basically hand made and had a hand made quality to it, In recent years pop art has been cleaned up with the invention of vector  graphics and is almost a post modern approach to pop art as were recreating the media again but with the modern technology at our disposal.  But the indication of certain elements of the media's what people connect with and mabie not only till they see the 2 next to each other do they start to notice the differences.
Labels: 3d abertay alastair low blender Concept Development dundee media tests non photorealistic personal development pop art Pre-Production shaders whaam