Ok so one thing that i noticed the blender game engine dose is when switching scenes it just looks like its frozen and on slower computers people may think its crashed so its time to make loading screens work.
I actualy made this the morning of the jam but havent got round to posting till now.

I drew a digram here: of how I thought it would work 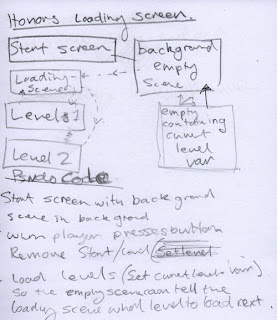 I use a constant background loading scene which when a new level has to be loaded , it removes the current level and loads the next the advantage of this is that it will now have preloaded the loading scene and there should be no wait for it to show and it will remain showing until the next level has loaded and apperes on top.

I tried making a cog spin with game logic on the test to see if I could have animated loading screens.
The answer is no it looks like its crashed on the loading screen, ie has a static image and then loads the next level this was good to know so I don't spend time animating something which wont show unless I add a timer but then the animations will stop and no one really wants to look at a loading screen.

Any way hers it in action:

this test went well and i learned that cnat have animated loading sceens but could have a coustom loading screen for every level if i sent a message to the loading screen controll object.
Nex thing to do is try dupli groups and scene linking with this method whitch i dont know if it will work or not. But thats why these are called tests.