In the new story the first location is the art collectors house. I want this place to be slightly intimidating , scary and  abanderd but like it could have been nice at some point. 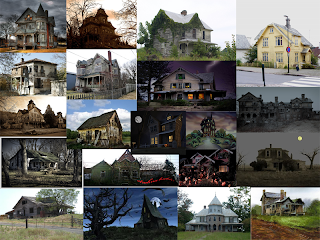 This is the first sketch i did of the house. 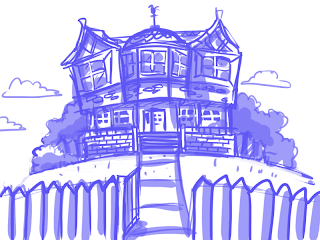 Things the house needs:
I want the boy to have to go up the stairs in the first place and then there has to be a big room (preferably round with big windows like the one above) for a place to have the final boss battle.

This image shows a verry rough idea of the interior of the building, the perspective is off and the layout dosent match the house above but it gives the right kind of feeling im going for overall. This is by no waya a finished drawing. 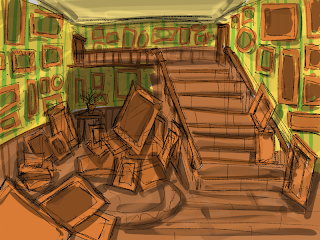 One of the things i wanted to get accros in this image was the amount of paintings in this house, i dont want it to look messy as such just full.

EDIT:
Here is some moresketches still not found the right house design 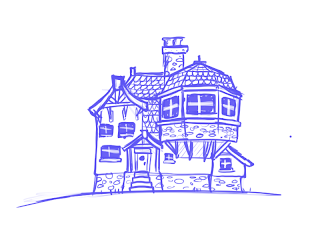 This one looks too medevil or like a windmill or soemthing but i liked the big round room. 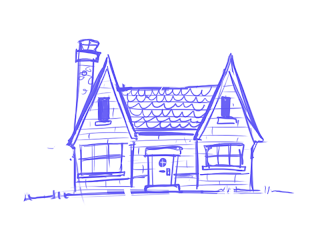 this one is inspired by the house from up. I realised that this story is similar to up but has enough differences to make it its own.

EDIT 2:
I made a quick lore plan of the house,
The player come ins through the front door then up the the painting where the old man is, and then follows the paint trails to the next paintings. Finally ending up that the last boss fight.
the grey shaded areas is objects you cant pass. 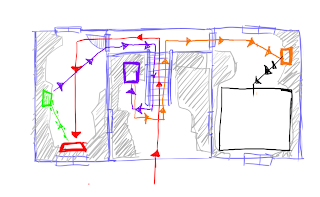