after how the boy turned out in the lest post i wanted to make the old man soon and i did 2day.
Heres how it went:
This was the 2 models i made here the same apart from the eyes , the on on the left has eyes like the boy dose and the right is like in the old man sketch. 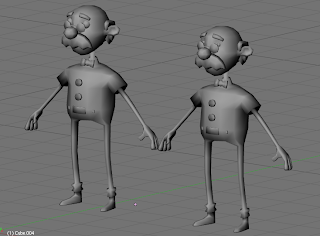 I decided to take the same approach as the boy with the eyes but keped the other one incase
I made this model from the original ortho sketches: 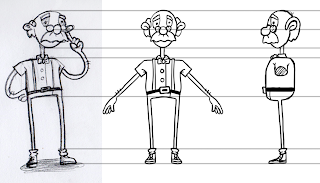 the pose was slightly changed from the refrence and his head shape was tweaked a lot to get it to look right. I decided to make the braces in the texture to save on polygons.
So like the boy model i made an ambient occlusion map of the non mirrored pieces. 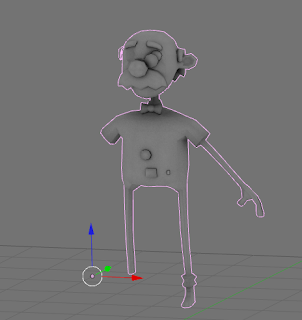 And here is the basic Ao map with base color in Photoshop. 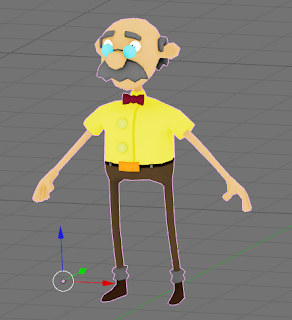 With a lot more work on the texture and ages trying to get the braces right i deceded against them and removed them, the buttons were enough detail. 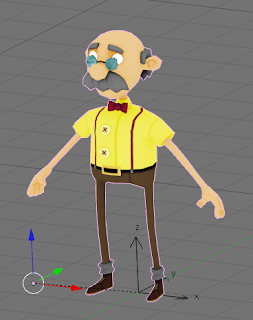 this is the final model and texture, the glasses have alpha but dosent show properly in the viewport but dose in game. 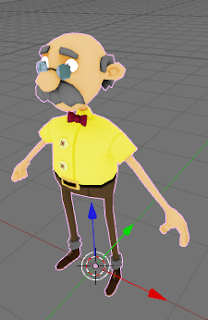 I bright in the rig from the buy and edited it, had to remove a bone in each arm and leg to get it to match the mesh joints.

I got some of the animaitons for free because i reused the old rig , they just needed a little edditing.
I had a problem with pasting the oposite pose on the right foor for some reason but i deleted it and remirrored the left one over and that fixed it.

(I also came into a problem with the game logic on the armature. I made the armature in blender 2.6 for another project and brought it in. For some reason whenever i tryed to add a keyboard Sensor blender crashed :S
But i make a cube and copied the empty loigic bricks from it to the armature and that fixed the problem.)

So heres the animations for the old man:


I learnd some new tricks here and this model was a lot quicker than the boy as i used th boys popology for refrence in this one, and the old man dosent have much hair witch took up a bit of time in the boy.
Labels: 3d abertay alastair low animation blender Honours Project Portfolio lowtek non photorealistic npr personal development